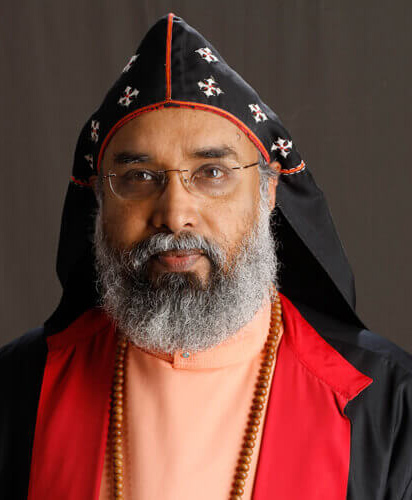 Dr. Isaac Mar Philoxenos Episcopa is a student inculcating all necessary streams of thought, to develop spiritual fervour in the people of India, through a dialogue based on grace, which can inter connect Theology and Hindu Philosophy.

He was born on 5th December 1951 as the son of late Sri AM Isac and Mariamma of Attupurath family of Mavelikkara, Cherukole Mar Thoma Parish. He completed High School education from BH High School Mavelikkara. He completed BA Degree from Bishop More College, MA from Banares Hindu University and BD from Calcutta Bishops College.

He was ordained as Semmas on 29th May 1976 and as Kaseessa on 9th June 1976. He served as the vicar of Rajara, Bilaspur, Allehabad, Renuket, Singroli, Boston, Mumbai and Santacruz Parishes. He got MTh Degree from Princeston Theological Seminary and Doctorate from Banaras Hindu University. It is significant that the university awarded Doctorate on the basis of research based on the place of grace in Vaishnava Philosophy and Christian Theology. This research was a fundamental search for ideology helpful for meaningful dialogue.

He was elected as a member of the World Council of Churches (WCC) Central Committee for a second time and worked in WCC, Policy Reference Committee, WCC Reference Committee on Justice and Peace, Chairman of ECC and unit 1 of NCCI.
He was elected a second time as President of Senate of Serampore. He fulfils his responsibilities in his own special way as President of Holistic Child Development, India and now as member of the Executive. He was Chairman of the Governing Board of Kottayam Vaideeka Seminary and Manager of Kozhencherry St. Thomas College.

Thirumeni is committed to working with the utmost spirituality and is dedicated to providing a growing social service. He is very keen to alert and encourage the members of the Church to continually and effectively uphold meaningful ministry among the utterly poor millions of Indian people.

St THOMAS Mar thoma Church, BRISTOL is a registered charity in the UK. Our charity reference no: 1122211

Event has been added to your calendar successfully.